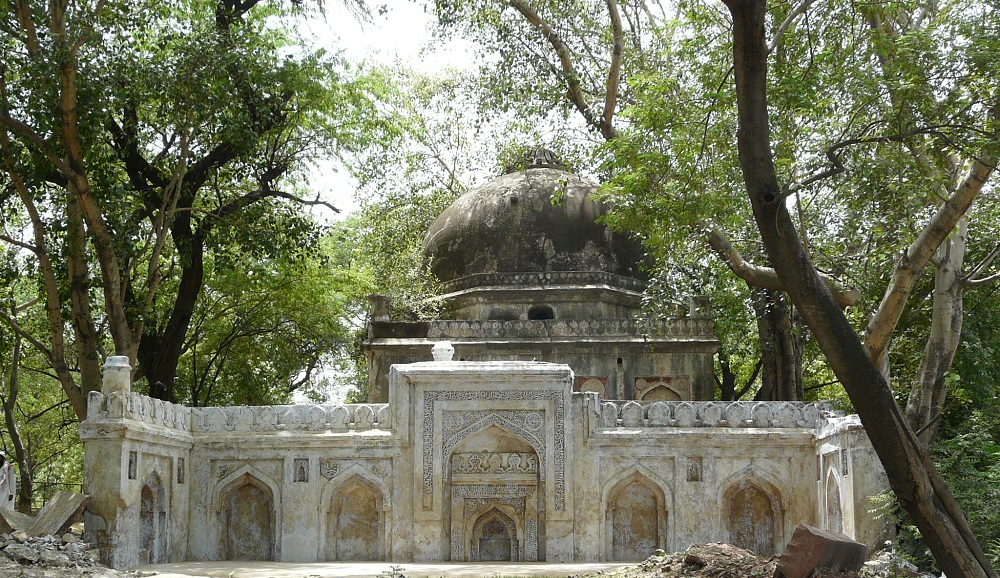 Archaeological Park is a natural place where you can find vestiges (sculptures, crafts, human remains, among others) of an ancient culture, generally protected by the state. Archaeological Park contains the largest collection of religious monuments.

This park has the largest number of monuments in a single location in the world. One of the main attractions of the Mehrauli Archaeological Park comes in the form of two monuments found together, the Kamali Jamali Mosque and the tomb.

The intricate chiseled ceiling of the mosque is well worth taking a look inside. There is also an impressive 16th-century staircase inside the park, next to the ruined tombs of Balban and Quli Khan. This place is a treasure for history lovers.

It will take more than half a day to explore the whole place. The park is widely spread and dotted with important and interesting monuments to see. Walk amongst the architectural relics of the glorious Delhi Sultanate, Mughal Empire and the British Raj.

A combined effort of Delhi Tourism, Delhi Development Authority, State Department of Archaeology and Indian National Trust for Art and Cultural Heritage, this conservation process is considered one of the best examples of the collaborative effort.

Things to do in Mehrauli Archaeological Park:

The Baolis of Mehrauli are three water wells approached through a single-stage known as stepwells located in Mehrauli in Delhi, India, in the Mehrauli Archaeological Park. These are the Anangtal Baoli, the Gandhak Ki Baoli, and the last is the Rajon Ki Baoli.

These were built under the ground level as groundwater edifices & in the context of Hinduism, they were built as shrines in medieval times. Rajon ki Baoli, also known as Rajon ki Bain, one of the most beautiful and architecturally prominent Baolis of the city hides in plain view in the wilderness of Mehrauli Archaeological Park.

Take a walk in the Mehrauli Archaeological Park and one would come across a magnificent structure with intricate artwork that looks like a city in itself. The largest and most artistic among the three Baolis in Mehrauli is the Rajon ki Baoli -a stepwell once used by Rajon (masons).

Built by Daulat Khan during Sikander Lodi’s reign between 1498-1517. The Baoli is a rectangular structure and has four different stages with rooms on either side at each level. These rooms were built for masons/travelers to rest.

There are four levels down. Each level has a courtyard and rooms with ornate work around it that lie unnoticed. Opposite the Baoli are a Lodi Dynasty mausoleum and both the structures say ‘Protected Monument’. The monument is of national importance under the Ancient and Historical Monuments and Archaeological Sites and Remains Act 1951.

On the right side of the Baoli lies a staircase that leads to a small mosque on the terrace. And on the outside is a twelve-pillar canopy tomb also known as Barakhamba. In 2004-05, the Archaeological Survey of India and Indian National Trust for Art and Cultural Heritage carried operations for desilting of the well. Desilting of the stepwell was carried out up to 6.1 meters, following which the water level up to 20 feet.

It was built in the 15th century by a Sufi saint who is buried in the tomb next door. The mosque must have been splendid in its day, although little of its original decoration remains. However with the tomb that has a spectacular mosaic ceiling that is worth the visit to Mehrauli.

Jamali Kamali Mosque and Tomb located in the Archaeological Village complex in Mehrauli, New Delhi, comprise two monuments adjacent to each other, one is the mosque of two persons with the names Jamali and Kamali and the second is the tomb.

Jamali is an Urdu word which means beauty was the pseudo name given to Shaikh Fazlu’llah, also known as Jalal Khan, a renowned Sufi Saint who lived during the pre-Mughal dynasty rule of the Lodi ’s, and he was greatly regarded.

Kamali was not so much popular person but due to associate with Jamali, he became popular. Both names are tagged together as “Jamali Kamali” for the mosque as well as the tomb since they are buried adjacent to each other. Jamali Kamali mosque and the tomb were built in 1528-1529. Jamali was buried in the same tomb after his death in 1535.

The tomb of Balban is quite close to the Jamali Kamali mosque. The tomb of Ghiyas Ud din Balban, the last sultan of the slave dynasty (1200-1287), is a good example of Indo-Islamic architecture. Made of masonry, it stands out for containing the first arch built in the country.

It also housed the first dome, although there are no remains of it, so the oldest standing is the Qutab complex, visible from the tomb of Balban. The Tomb of Balban is a building of historical importance in the development of Indo-Islamic architecture.

Going to a little further a beautiful rose garden comes across. The best time to visit the Rose Garden is during December / January months when the flowers are in full bloom. As it emerges from the name, Rose Garden is a garden with some of the rare and imported variety of roses.

This an elegant garden filled with colorful roses. The tourists love to visit this garden. Most of the plants grown in these first orchards have probably been species collected from nature. However, there were a large number of selected varieties that were grown from early times. This rose garden is well maintained by the authorities.

The Tomb of Mohd Quli Khan is an offbeat and quiet place and it is still so beautiful. This tomb was made for Muhammad Quli Khan, brother of Adham Khan, both of whom were sons of the foster mother of Akbar. The external and interior of the tomb have excellent artwork.

One can have an excellent view of world-famous Qutub Minar from this Quli Khan tomb. Bayan Qulï was made the titular ruler of Bukhara by Emir Qazaghan In 1348, who had seized power in the area in 1346. In 1358 the emir was assassinated.

The power passed to his son (Abdullah) who had the Bayan Qulï executed. The mausoleum of Bayan Qulï shows the elaborate decorative style of 16th-century Bukhara, including ample use of carved terra cotta with a huge blue glaze.

Another famous monument of Delhi is the Walled mosque. It is located in Mehrauli Archaeological Park. There is a beautiful lake also which offers a charming view of the sunset. If you are a bird’s lover, you must take a walk on this side as the chirping of birds we don’t hear in our busy lives.

The complex was a pleasant place with several controlled streamlets of water, which lead to a tank (now called the Metcalfe’s Boathouse and Dovecote). The Metcalfe’s boat houses a small structure atop a mound gives a good view of the surroundings.

This was built by Charles Metcalfe, a negotiator of the East India Company, to keep a watch on the movements of Emperor Bahadurshah Zafar. Now it’s used for boating and swimming. Steps built from this boathouse lead to his Dilkhusha.

He also built, in “pseudo-Mughal” style, a Chhatri or folly with a dome and arches, and few other follies known as Garhganjs (in the form of a spiral and square stepped ziggurats). All of the above can be seen in the Archaeological Park, which has strategically placed signage’s showing directions to the various heritage monuments.

How to Reach Mehrauli Archaeological Park of New Delhi?

The nearest metro station of Mehrauli Archaeological Park is ‘Qutub Minar Metro Station’ on the yellow line. Exit from metro station & walk to your right, towards Delhi and then enter the Mehrauli A. Park is about 500 meters away from the metro station on your left.

Mehrauli Archaeological Park timings are 5 am to 6:30 pm and opens every day.

Angkor Archaeological Park tickets are free for everyone.

The Mehrauli Archaeological Park of New Delhi is home to the crumbling ruins of tombs and palaces that date back to the early medieval times until the 19th century. The park stretches across 200 hectares and is an atmospheric location that is less crowded than the nearby Qutub Minar World Heritage site.

One of the main attractions of the park comes in the form of two monuments found together, the Kamali Jamali Mosque and the tomb. The intricate chiseled ceiling of the mosque is well worth taking a look inside.

There is also an impressive 16th-century staircase inside the park, next to the ruined tombs of Balban and Quli Khan. In spite of these above, you also read more detail about historical places at Mehrauli Archaeological Park of New Delhi.

So if you planning to visit Delhi then you must visit the Mehrauli Archaeological Park of New Delhi as here you can enjoy many historical buildings and come to know about the past of India. Here you can easily reach by metro.